Top chefs give us some tips on playing with fire.

Professional chefs use many methods to test steak for doneness. Daniel Gursha, executive chef at Ledger in Salem, slides a super-thin cake tester into the meat, and then touches it to his lip. Cool is rare, while too-hot-to-touch is well done. Executive chef Steve Zimei of Chopps American Bar and Grill in Burlington swears by the famous finger test—judging the temperature by comparing the firmness of the meat to the firmness of various parts of your hand. But if you don’t spend 10 hours a day sweating over an open flame, with the scars to prove it, just use a meat thermometer. The tiny puncture it makes is well worth knowing your meat is properly cooked.
“I can’t imagine hosting a group of people and not being confident about how your meat is done,” says Matt O’Neil, chef/owner at Ledger and Blue Ox in Lynn and former cooking coach for ESPN (yes, that’s a thing). “Rely on a meat thermometer—it’s a sure thing.”
Besides, there are plenty of ways to impress guests at your next tailgate without risking food poisoning, starting with charcoal. O’Neil says if you bring briquettes instead of a gas grill, you are already ahead of the game. 2. Tie the rosemary and thyme together with butcher’s twine to form an herb brush. Use the herbs to brush the steak with extra virgin olive oil.

3. Place the steak on the hot grill, cooking about 10 minutes on each side. Serve medium-rare to rare.

4. Remove steak when it is done and let rest for 5 minutes before slicing and serving

“Those tiny gas grills don’t work,” O’Neil says. “They won’t get hot enough.” Plus, hardwood briquettes add flavor and allow you to try one of Ledger’s coolest tricks—cooking steak directly on the coals. For the skirt steak lunch special at Ledger, Gursha uses a blow dryer to stoke the flames, getting the coals in his custom wood-fired grill blazing hot, and then drops the meat right on top.
“You’re basically suffocating the flame, so it doesn’t flare up,” Gursha says, noting this technique is really best for a cut that you plan to serve very rare. He sears the meat on both sides, and takes it out and bastes it with melted butter—brushed from a small cast-iron skillet sitting right on the grill—and then drops it back in. The resulting cut of meat is gorgeously caramelized on the outside and tender and rare on the inside.
Be it charcoal or gas, high heat is critical to any searing situation, says Nick Yebba, Jr., executive chef at Teresa’s Prime in North Reading, where they sell up to 1,000 pounds of meat a week. At his restaurant, the broiler runs at a whopping 1,200 degrees. Steaks start on a special searing plate to seal in all the juices, and then are finished in the broiler.
Home cooks may not have—or honestly even want—the ability to cook at 1,200 degrees (you need to drink a lot of water, Yebba says), but you do need to give your grill a chance to warm up. For charcoal, that means waiting until all the coals are gray. For gas, that means turning on the burner a good 15 or 20 minutes before you want to cook, Yebba says, noting that too often, someone will turn on the grill, grab the meat, and toss it on right away. [more]

Stuff that Cheeseburger next time. Your GF, Friends, and Boss will love it…you have to check this BBQ Pit Boys Burger recipe out. Please Like, Subscribe, Fav and Share us. Thanks for stopping by the Pit and for your continued support..

Stuff that Cheeseburger next time. Your GF, Friends, and Boss will love it…you have to check this BBQ Pit Boys Burger recipe out. Please Like, Subscribe, Fav and Share us. Thanks for stopping by the Pit and for your continued support..! –BBQ Pit Boys Are you looking for barbecue and grilling recipes to serve up at your Pit, family picnic, or tailgating party? Then put your Barbecue Shoes on because we’re serving up some delicious, moist and tender, and real easy to do cooking on the ol’ BBQ grill.

To print out this recipe, or to get your BBQ Pit Boys Pitmasters Certificate, our custom BBQ Pit Boys Old Hickory knife, gifts and more CLICK HERE https://bbqpitboys.com/barbecue-store….

To purchase our official T-Shirts, Mugs, Aprons, Scarfs, Hoodies, and more shipped to you anywhere in the world CLICK HERE https://bbqpitboys.com/barbecue-store…

No matter Which One You Like - the TurboGrill™ will Do Them Right!

Steak Challenge: What is the difference between grass-fed beef and prime beef? The steak challenge happened organically when I realized I had two different types of beef defrosting in the refrigerator. One steak is a New York Strip steak I cut from a prime striploin from Costco. The other was a thick, grass-fed beef ribeye,

The steak challenge happened organically when I realized I had two different types of beef defrosting in the refrigerator. One steak is a New York Strip steak I cut from a prime striploin from Costco. The other was a thick, grass-fed beef ribeye which had a rectangular shape similar to a New York Strip. Neglecting reading both steaks labels closely would come back to haunt me when it was taste test time. [more]

Editor’s Note: This is the second part of Richard’s column featuring cooking methods by Scott Simerly. The column will conclude in next Sunday’s edition of The Herald-News.

Most folks are very familiar with the oven and many ways you can cook with them. Most ovens today are electric, but history has these using firewood to heat them up. Today you can get all varieties and makes/model using gas or electricity now to heat.

Baking uses the lower element in the oven to create an even heating temperature for the food cooking on the various racks.

Good prime rib recipes are hard to find. A good friend of mine, Terry Montague from Idaho Falls, Idaho, shared his recipe with me several years ago and now this is the only way I make prime rib.

This recipe could easily be grilled on a TurboGrill. 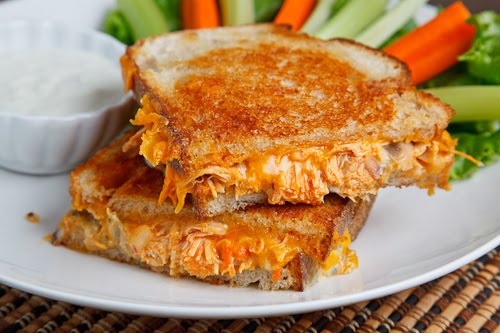 All of the flavors of buffalo chicken wings rolled up into a golden brown grilled cheese sandwich.

These can easily be grilled on the TurboGrill.

Rinse rice, immerse in water and cook in rice cooker. (At her diner, Harue cooks rice in a pot.)

Mix salmon flakes in cooked rice. Moisten palms and rub in some salt. Take slightly less than a bowl of rice and shape. Rub salt on palms again and hold. Dust with sesame and hold again. Repeat process, since sesame tends to fall off.

Grill rice balls slowly over cooking grid on low heat to prevent them from burning. Turn when somewhat browned. The rice balls are done when the aroma of sesame rises and they are slightly browned all over.

Rice balls sit on the cooking grid placed over a “shichirin” charcoal grill. When the sesame seeds on their surface start to pop, a mouthwatering toasty …more